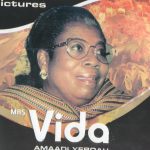 Vida Amaadi Yeboah was born on 27th July 1944 at her maternal family village in the Eastern Region to Madame Kate Oye Ntow Ofosu and Eric Perigrino Nelson. Both her parents hailed from royal families in their respective traditional communities. Her circumstances were non-the- less quite modest and sometimes even deprived. Thus she had an early insight into the sacrifices parents and particularly mothers have to make to put their children through school. She was an exceptionally bright child and from her small town, she passed the required examination enabling her to attend the prestigious Wesley Girls High School and followed it up with a first degree in French from the University of Ghana. She went ahead to read for a Masters in the same subject from University of Bordeaux in France. She equipped herself to enter into the field of education with a post-graduate diploma in education from the University of Cape Coast in Ghana.

Vida Yeboah taught in several secondary schools in Ghana and became headmistress of one of the prominent girls schools namely Mfantseman Girls’ Secondary School. Her drive, singlemindedness and meticulous management of resources became evident from here and she never looked back.

Vida Yeboah was appointed to the position of Deputy Minister for Education in charge of School Education in 1985. In this position she was responsible for driving one of the most far-reaching reforms to the Ghanaian Educational System aimed at restructuring the system and implementing a new curriculum. This required a broad range of skills and qualities ranging from strategic planning and hard-nosed negotiating skills to community mobilisation and curriculum development which she had to rapidly develop on the job.

She undertook this challenge with single-minded passion, learning from her mistakes and building a formidable implementation machinery and an enviable international reputation.

Vida Yeboah ran successfully for elections twice from 1992 and represented the people of Akwapim South Constituency in the Eastern Region for two terms. While in parliament, she served as the Minister for Tourism.

During her tenure as a policy maker in education, Vida Yeboah had an experience which was to concentrate her energies and passion for many years to come. Vida returned from a meeting of African Ministers of Education and representatives of international funding agencies and publishers in 1992, full of enthusiasm for she had been part of a group of five defiant African women ministers, the prime movers who had decided that the development of Africa’s education would only be effective if undertaken by Africans themselves. They were Hon Simone De Comarmond of Seychelles, Hon. Dr. Fay Chung of Zimbabwe, Hon Paulette Missambo of Gabon, Hon. Alice Tiendrebeogo of Burkina Faso and Hon Vida Yeboah of Ghana.

Recognizing that the continent’s development could not proceed without the full participation of educated and conscious women, they made a solemn commitment to changing the unacceptably low status of girls and women in Africa. They were convinced that women policy makers in education could draw on their experience as well as their clout to constitute a uniquely powerful pressure group to ensure that all girls in Africa enter the school system, are retained and achieve to the best of their ability.

The Forum for African Women Educationalists was born of this conviction in 1992 and Vida’s experience in Manchester, England inflamed a passion she had long held to improve the lot of poor rural children with whom she strongly empathized due to her own experience.

From that point onwards, a great and tireless advocate for the African girl child was born. She returned to Ghana and mobilized women in the area of education to form the core of what was to become FAWE Ghana. Her commitment was infectious and soon she impressed it upon us that Ghana could not fail in this important collaborative exercise.

For FAWE Ghana Chapter, Vida Yeboah’s greatest contribution to FAWE as a whole lives in the practical interpretation of the organization’s goals and aspirations into grass- roots programs. Under her drive, efficiency and motivation as well as her efficient management, FAWE Ghana chapter in spite of considerable operational difficulties became a model on the continent for new chapters to learn from. One of her sayings was: “Remember, ‘Together, we should be able to build a mountain.” (Yeboah: January 2003).She demonstrated the essence of multi-tasking which is the lot of any great woman leader, for she balanced her official duties as Minister and Member of Parliament with playing the role of Chairperson of our organization until she later became the full time coordinator of the Chapter.

FAWE is today the leading voice on female education in Africa. It is a unique and recognized pan-African organization which has had a resounding impact both at the community level and in the highest corridors of power globally. Vida Yeboah served on the Executive Council of FAWE as a founding member, and made herself available to work at the head quarters in Nairobi, Kenya; support National Chapters of FAWE all over the continent and represent FAWE at international forums.

A gist of the work Vida Yeboah did in Ghana will demonstrate the extent to which she became one of the greatest champions of girl’s education in Africa and especially in Ghana in recent history. Much of her work was pioneering as FAWE had just been established and had to be initiated according to the situation prevailing on the ground in various countries. FAWE members were to take the lead in advocacy for policy and attitudinal change as well as innovative interventions aimed at promoting girl-child education.

As regards advocacy and sensitization, Vida Yeboah assembled a team of educationists, community leaders and legal experts to begin her initiatives. The approach was to involve all-specifically, Civil Society Organizations – CSOs, District Assemblies, Public and Private Agencies, Religious and Traditional Authorities, Development Partners, Parents, Teachers, Ministry of Education, The Media and the Girls. This was summed up in her popular saying – “We are all part of the problem and part of the solution”. FAWE Ghana’s advocacy was often characterised by the determination of its leader Vida Yeboah to “Tell it as it is,” so that a genuine appraisal of the situation could lead to sincere commitment by stakeholders to resolving the issues arising.

Under Yeboah’s leadership, FAWE Ghana Chapter developed effective community engagement strategies leading to impressive community awareness and initiatives to promote girls education throughout Ghana. The strategies tapped into the protocols and use of local wise sayings for a smooth entry into and engagements with communities.

This process importantly involved empowerment of local authorities through training and exposure to the legal options available to them under the Ghanaian legal system.

Community leaders were stimulated and inspired to pass by-laws and community regulations to create an enabling environment for girl’s education. A number of traditional practices inimical to girls and women were also modified or proscribed by community leaders often with the collaboration of parents and other significant family members.

The community initiatives were supported by the signing of Memoranda of understanding, the formation of small interest groups, District and Community Management Teams.

Vida Yeboah’s vision for the empowerment of girls involved enabling them to take their destiny into their own hands. Some of the interventions are significant because they were initiated from the early 1990s when they could be said to be pioneering .These include the establishment of Girls’ Clubs in schools, schemes for peer education for adolescent sexual health; community study centres, vocational training for school drop outs , holiday camps for girls . She indeed sought to empower them by “giving them a voice today for the future.”

By 2002, the success of FAWE Ghana’s advocacy for girl-child education to school was resulting in a growing number of pupils from the basic education level seeking secondary schooling. On the other hand, girls from rural schools were performing poorly or had dropped out. Taking a step of faith, Vida Yeboah led FAWE Ghana Chapter to establish Nsaba Diaspora Girls’ Secondary School, now known as Diaspora Girls Senior High School. Vida Yeboah pulled all the strings at her disposal to cobble together the funding to build the first few structures of the school. Together with other founding members of the Chapter she literally went from door to door to assemble the first cohort of students. These students received special tutoring and mentoring and benefited from scholarship leading to commendable improvements in their academic performance. As at 2017 the school is a government –assisted institution with about 700 students.

In Vida Yeboah career as headmistress and later as Minister with various portfolios, she cultivated a reputation as a stickler for scrupulous management of funds. She was able to save her school and the country millions of Ghana cedis. She was also able to stretch funds entrusted to her to cover an impressive range of activities to the astonishment of colleagues and donors/government authorities alike. She incorporated these skills into the founding and management of FAWE Ghana Chapter and earned the Chapter the reputation of being a thoroughly reliable partner.

Under Vida Yeboah’s leadership, the FAWE Ghana office ran a resource and documentation centre, a vocational training centre and eventually the FAWE FM radio station which went on air only a few weeks before her death in 2006. Referring to Yeboah’s work and particularly the Radio Station, Penina Mlama, then Executive Director of FAWE said on the occasion of FAWE Ghana’s 10th Anniversary: —“You have been a trailblazer of the entire FAWE community in Sub-Saharan Africa in many ways that promote girls’ education –Commissioning the FAWE FM at Fotobi village, right among the grassroots, is yet another first. We thank you for your many endeavours in girls’ education, which are a major contribution to Africa’s progress towards achieving the goals of Education for All (EFA). Ghana’s flag is flying high…”.

The prominence given to girl’s education in national planning documents is often taken for granted but the pioneering work of Vida Yeboah and other founders of FAWE in promoting policy change in girl’s education must be acknowledged.

Beyond her work in FAWE, which highlighted her role as a passionate trail blazer, Vida Yeboah was a patriot and an exemplary public servant whose record should extend her mentoring influence even though she is no longer physically present.