Our work in context

African countries have only made slow and uneven progress towards the Education for All (EFA) goals set for 2015. Landmark protocols have recognized these disparities and advocated strongly for access to basic education for all children and for gender equity in education. We have developed and implemented practices and models over the years that, if adopted across the region we operate in, could lead to significant advances in educational quality and gender equity in Africa over the next decade.

Since the 1990 World Declaration on Education for All (EFA), both education and gender equality have been recognized as fundamental requirements for development.

Yet almost twenty years after the Declaration, African countries have only made slow and uneven progress towards the goals set for 2015. African girls and women do not have the same educational opportunities and life chances as their male counterparts.

According to the 2009 EFA Global Monitoring Report, sub-Saharan Africa accounts for 47 percent of the world’s out-of-school children. Despite considerable progress towards universal primary education in recent years, 35 million African children of primary school age are still not enrolled in school. More than half of these – 54 percent — are girls, many of whom have never attended school at all.

More than half of sub-Saharan African countries had not reached gender parity in primary education by 2006. At secondary level, gender gaps existed in most of the region’s countries, while at tertiary level, only Botswana and Swaziland had achieved parity.

Women account for less than 20 percent of students in scientific subjects in tertiary education, and female teachers are particularly under-represented at secondary and tertiary levels, being more represented at lower levels of education.

Landmark protocols such as the Jomtien Conference (1990), the World Education Forum (2000) and the Millennium Development Goals (2000), have recognized these disparities and advocated strongly for access to basic education for all children and for gender equity in education.

FAWE believes that empowering girls and women through education brings immense benefits not only at individual level but at community and country level too.

We have developed practices and models over the years that could lead to noteworthy advances in educational quality and gender equity in Africa over the next decade if adopted across the region.

Despite various concerted efforts, millions of children in Africa, majority being girls, continue to be out of school. Gender inequalities in education persist in Sub-Saharan Africa to the detriment of girls, with socio-cultural, economic and political challenges still constituting barriers to girls’ education in the region. We address this through our advocacy and intervention work to eliminate gender disparities and to promote girls’ education and development.

Education is a human right and a fulfilling experience that helps girls and boys reach their full potential in society. However, millions of children in Africa are still out of school, a majority of them being girls. Education for All (EFA) and the education targets of the Millennium Development Goals (MDGs) were put in place specifically to address concerns linked to education and development.

Despite this, gender inequalities in education persist in Sub-Saharan Africa to the detriment of girls. This is evidenced by disparities in access to school as well as in enrolment, retention, completion and performance rates. These disparities point to structural and systemic gender inequality which is partly reflected in education, as was reported by The State of the World’s Children (2007).

The EFA Global Monitoring Report 2009 found that in many countries, disparities based on wealth, location, gender, immigration or minority status, or disability deny millions of children a good quality education.

Sub-Saharan Africa accounts for 47 percent of out-of-school children worldwide, with 54 percent of those children being girls. In 2006, 35 million children were not enrolled in school. This is almost one third of the school-age population.

In 2008, specifically in primary schools, Sub-Saharan Africa had yet to achieve gender parity. Gender disparities were largest in rural areas and among poor households. In secondary school, only 30 percent of boys and 25 percent of girls were enrolled. Redressing this situation demands serious investment in getting more children, both boys and girls, to secondary school and achieving gender parity. 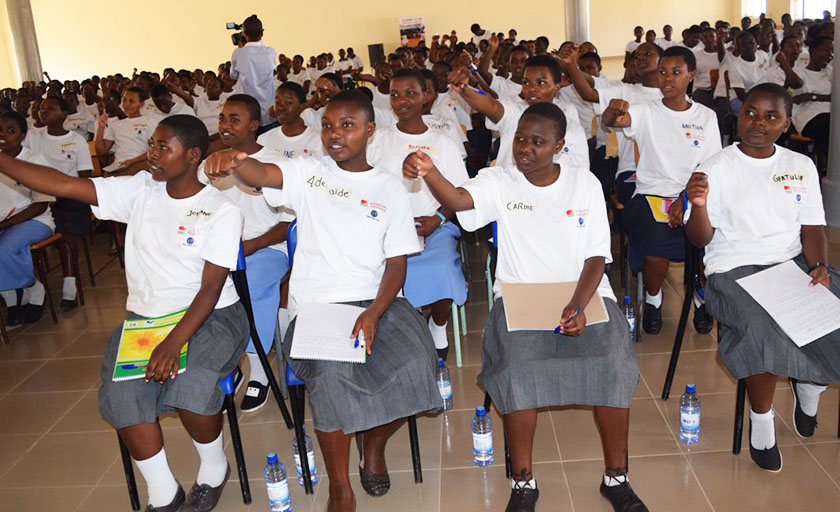 Furthermore, female students tend to be concentrated in Humanities, Arts and Social Sciences, with a weaker presence in scientific and technological subjects. In 2005, female students constituted a mere 40 percent of total enrolment in Sub-Saharan Africa in technical and vocational education.

While much progress has been made over the past ten years in rectifying gender imbalances in education and development in sub-Saharan Africa, socio-cultural, economic and political challenges nevertheless still constitute barriers to girls’ education in the region. FAWE seeks to address this through its advocacy and intervention work that aims to create conditions for the elimination of gender disparities and to promote girls’ education and development.