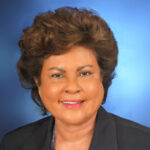 Hon. Simone Marie-Anne de Comarmond is the current FAWE Africa Board Chairperson for the period of 2021 – 2023. A founding member of FAWE, Ms. de Comarmond was amongst the five African women Ministers of Education who, in October 1991 met informally during a World Bank meeting of donors to African education to discuss the very real obstacles faced by African girls and women in gaining an education and improving the quality of their lives. A founder Member of FAWE, she has previously served as the Chairperson of FAWE from July 2005 for two terms of 3 years each. In August 2017, she was re-elected as a Board Member to serve for 3 years.

Ms. de Comarmond was born on 1st August 1954 and was educated in the Seychelles. She was awarded a Diploma in Accounting and Management with distinction in 1980 from the Seychelles Institute of Management, and a B.Sc in Public Administration from the Century University (USA) in 1994, through the distance education programme.  She has had extensive working experience in the Public Service rising up to the ranks of Secretary to Cabinet and to that of Head of the Public Service (1973 – 1989).

She has equally served fourteen years in the Cabinet of Ministers of the Republic of Seychelles in the capacity of Minister for Education and that of Tourism & Transport (1989 – 2003).

Ms de Comarmond has had a long career in politics (1983 – 2021) and had played a major role in the leadership of the ruling party then.  She has since mid-2015 been an active Executive Committee Member of the main opposition party LDS (Seychellois Democratic Union) serving as Secretary General to date.  She played a pivotal role in the creation of this major opposition party. The LDS came to power in October 2020 as a result of a landslide victory in both the Presidential and Parliamentary elections, and is now leading a democratic government, following a smooth handing-over of power.

She is currently serving as a member on the Constitutional Appointments Authority (CAA) (2017 – 2024), to which position she was appointed by the President of the Republic of Seychelles, in accordance with the national constitution. A high profile institution that recommends the appointment of constitutional appointees to the President e.g. Chief Justice, Judges, Attorney General amongst many others.

Ms de Comarmond is also actively engaged in private business.  She has set up her own office from 2010 to date, engaging in offshore financial business in partnership with a business professional operating overseas.

Ms de Comarmond has travelled extensively throughout the world in different capacities with reference to her various responsibilities, and “hats” that she has worn over the years, totaling over 65 countries.   Her greatest aspiration is to live to see many more women taking on a leadership role in politics, especially in Africa.  Gender equity and social justice is her strong belief, and she plans to continue working to bring a positive change to her country and the African region.