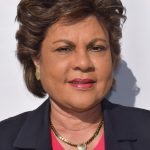 A founding member of FAWE, Ms. Simone Marie-Anne de Comarmond was among the five African women ministers of education who, in October 1991 met informally during a World Bank meeting of donors to African education to discuss the very real obstacles faced by African girls and women in gaining an education and improving the quality of their lives. A founder Member of the Executive Committee (1992-1999), she was elected as the Chairperson of FAWE in July 2005 for 3 years and unanimously re-elected in July 2008 for a further 3 years. She was in August 2017 re-elected as a Board Member serving for 3 years.

Born in 1954 and educated in the Seychelles, Simone was awarded a Diploma in Accounting and Management with distinction in 1980 from the Management Training Centre (referred to as the S.I.M.), and a B.Sc in Public Administration from the Century University (USA) in 1994, through the distance education programme.

On the political front, Simone has served as: Member of the District Executive Committee of the Seychelles People’s Progressive Front (SPPF) (1979-1987); Member of the National Youth League Council (1984-1986); She was elected as a Member of the SPPF Central Committee in 1983, until she voluntarily relinquished that position in early 2012. She went back to active politics in May 2015, where she, together with four other former Cabinet Ministers, was instrumental in the creation the Lalyans Seselwa political party, which coalesced with other opposition parties to form the Linyon Demokratik Seselwa (LDS), the main opposition political party in Seychelles.

Ms de Comarmond went into private business from January 2004. She owned and managed a small tourism establishment between 2004 and 2007. She is now engaged in financial offshore business.

Ms. de Comarmond has travelled extensively throughout the world in her different capacities. Her greatest aspiration is to live to see many more women as Heads of State and in other leadership roles in the world. She is a believer in gender equity and social justice and she plans to continue working to bring a positive change to her country and the African continent.