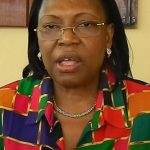 Hon. Paulette Missambo is one of the founding members of FAWE. She is a former Minister of State for Education of Gabon and has held several other ministerial positions.

She has served as the President of the Gabon Commission to UNESCO and has been honorary president of the Association of Female Educators of Gabon. Through the organisation she has supported the education of girls in Gabon and sponsored research on issues affecting them.