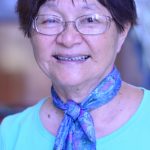 Dr. Fay King Chung was among the five African women ministers of education who, in October 1991 met informally during a World Bank meeting of donors to African education to discuss the very real obstacles faced by African girls and women in gaining an education and improving the quality of their lives. She was Minister of Education in Zimbabwe from 1988–1992.

A founding member of FAWE, Dr. Chung is currently serving in the FAWE Board as Honorary Secretary. She is an educator who has served in many capacities in the education sector having worked at secondary school and university levels as a teacher and as a teacher trainer.

In 1975, Chung joined the Zimbabwean liberation movement as a member of the Zimbabwe African National Union (ZANU) where she was in charge of Research, Planning and Teacher Training. Under her leadership, nine schools were established catering for 9,000 Zimbabwean children in Refugee Camps in Mozambique. Six hundred teachers received training at Matenje College that was set up for this purpose in Mozambique. The programme included curriculum development and textbook writing for a few core subjects.

After Zimbabwe’s independence in 1980, Chung was the first head of Educational Planning. There had been serious problems regarding access to and quality of education for African children. Under her leadership, primary enrolment rose from 35% to Universal Primary Education, whilst secondary enrolment rose from 4% to 65% of the age group. Dr. Chung established the well-known Zimbabwe National Teacher Education Course (ZINTEC) which improved the quality of primary teacher education. She steered the renewal of the primary and secondary school curriculum thus ensuring a combination of both quantitative and qualitative improvements in the education system.

Dr. Chung joined UNICEF as the Head of the Education Cluster in New York in 1993. Her main achievements in UNICEF was the development of education for emergency situations. At the time, twenty five countries were caught up in conflict and natural disasters and this disrupted their education systems. The programme allowed for the immediate re-establishment of education for the affected children, who would otherwise be deprived of education as refugees. UNICEF also pioneered a programme for Girls Education which helped establish Universal Primary Education in the majority of developing countries.

In 1998, Dr. Chung joined UNESCO as the Director of the UNESCO International Institute for Capacity Building in Africa (IICBA) in Addis Ababa. IICBA’s focus was on improving teacher training and use of information and communications technologies (ICTs) in Africa. IICBA developed a series of electronic libraries for teachers, and established computer education in universities in Ethiopia, Ghana and Uganda, utilizing the existing model from Pretoria University in South Africa.

Dr. Chung is the author of several books, her latest book being Zimbabwe Looking East.