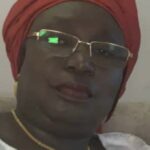 Mrs. Amicoleh Mbaye is an experienced professional in the field of education for more than 30 years. She was a Director of Basic and Secondary Education in the Ministry of Education in Gambia from January 2010 until December 2015 when she retired. Prior to that, she held different positions ranging from being a teacher, a school inspector, principal education officer programmes etc. Key amongst these positions was Project Manager for UNFPA funded POP/FLE, UNICEF funded school health program, World Bank funded HIV/AIDS Prevention & Control, School Health and Nutrition programmes from 2003 to 2010.

She then joined the National Accreditation and Quality Assurance Authority in The Gambia as Acting Chief Executive Officer and Director of Quality Assurance for Higher Education from March 2016 for a brief period of one year. She is currently engaged in educational consultancy.

She is also the current Chair of the Board of Governors for Armitage Senior Secondary School in The Gambia. She is working with some private schools as an adviser particularly on school health and girls’ issues.

Mrs. Mbaye still works closely with the Ministry on a range of issues particularly on basic education programs.