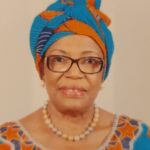 She obtained her University Diploma in Literary Studies (DUEL) from the Université Omar Bongo (UOB) de Libreville before pursuing further studies at the Université de Lille III where she obtained her Bachelor’s Degree, Master’s Degree and her Diploma in Advanced Studies (DEA) in French Linguistics. She returned to Gabon to work as a Teaching Assistant in the Department of Arts at the Université Omar Bongo (UOB) de Libreville. A few years later, she returned to France to train as a Teaching Inspector at the Institut d’Etudes Pédagogiques de Sèvres. She then joined the school administration as Inspector General of National Education.

After the National Conference, she was appointed Minister of Public Service and Administrative Reforms in the Transitional Government. She remained in the Government without interruption for the next 17 years serving in the following capacities:

– From March 25, 1994 to October 30, 1994, Minister of National Education and Vocational Training, Government Spokesperson;

– From October 30, 1994 to January 28, 1997, Minister of National Education, Youth and Sports, in charge of Women’s Affairs, Government Spokesperson;

Finally, Paulette Missambo has also played an active role in the civil society. She has held the following positions at the National and international levels:

– Founding member of the Forum for African Women Educationalists (FAWE)

– Founding Member and Honorary President of the FAWE-GABON National Chapter

– Founding Member of the Network of Women Ministers and Parliamentarians

– Grand Officer of the Equatorial Star

– Commander of the Order of Academic Palms

– Officer of the French Legion of Honor

– Contributed to the writing of the book: “Geography and Cartography of Gabon”, EDICEF 1982.