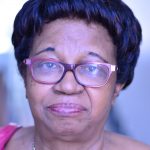 Hon Alice Tiendrebeogo was among the five African women ministers of education who, in October 1991 met informally during a World Bank meeting of donors to African education to discuss the very real obstacles faced by African girls and women in gaining an education and improving the quality of their lives.

A founding member of FAWE, Alice is currently serving in the FAWE Board as a member. She was appointed Minister for Basic Education and Literacy of Burkina Faso (1988-1995), then Minister for the Promotion of Women (1997-1999) where she developed the first three-year plan of action for the promotion of women and established institutional frameworks such as creating the National Commission for the Advancement of Women and appointing focal points in the ministries.

In 1996, Alice joined UNICEF as the Chair of the Monitoring Committee of the Initiative on the Education of Girls in Africa. She was also a member of the Consultative Forum on Education for All of UNESCO. She served as the Regional Advisor of the International Research Center for International Development (IDRC) in Dakar Regional Office (2003-2005) and was on the Board of the Centre for African Family Studies (2005-2007). She was the Director General of the Fonds pour l’alphabetisation et l’education non formelle FONAENF (2002-2014).